We are incredibly thankful to receive such wonderful reviews! Please check Asheville Movie’s review from Bruce Steele.  Steele is the Planning Editor for the Asheville Citizen-Times and a movie critic for Asheville Scene. You can read the review below, or check out Asheville Movies webpage here. 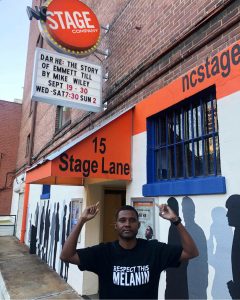 The one-man play Dar He: The Story of Emmett Till, written and performed by Mike Wiley, brings vividly to life a wide range of the historical figures involved in the horrifying 1955 torture and murder of a 14-year-old African-American boy from Chicago in the southern delta region of Mississippi.Wiley’s performance is a staggering achievement, as he embodies person after person, man and woman, black and white, each recounting or reenacting his or her part in the story. No costume changes, no exaggerated tics, and just one small white towel that becomes whatever Wiley needs it to be: a dying chicken, a liquor bottle, and so on.

Till himself is an especially vibrant figure here, no longer just a symbol or a victim but a boisterous young man who overcomes a stutter with brash self-confidence and a mischievous sense of humor.

Dar He — the title comes from a witness’s identification of one of the killers at the trial, pointing and saying, “Dar he is” — is a bravura accomplishment equal to the best work of Anna Deveare Smith. It also has the historic rigor of The Laramie Project, another play of multiple voices about a senseless and bigoted murder. But unlike in Laramie, which utilizes a full cast, Dar He is all Wiley.

It’s impossible to capture the nuance and emotional impact of Wiley’s work in words, and listing all the characters he conjures would be a mere grocery list that only hints at the abundant flavors and raw bitterness in store for audiences.

To name just a few: Wiley begins with the Look magazine reporter who interviewed the killers in 1956, gives the murderers and a white juror their moments without turning them into caricatures, and ends with Till’s mother. Indeed, Wiley’s enactment of the joys, the misery and the defiance of Mamie Till Bradley, whose insistence on an open coffin at her son’s funeral galvanized the growing Civil Rights movement, is rich, revealing and simply stellar.

Much of the show is, understandably, chilling, and when the lights change after one harrowing scene, you may be surprised to find there’s no blood on the stage. Much credit goes to the lighting team of Tracy Francis and Catori Swann, as both subtle and dramatic changes in illumination bolster Wiley’s work, as do select historical photos projected on video monitors.

Earlier this year a short film titled My Nephew Emmett restaged the kidnapping of Emmett Till from his uncle’s perspective, with sets, locations, costumes and a full cast. But Dar He at N.C. Stage Co. is a much more complete and compelling experience, dense with historical detail and electrified by its sense of immediacy and urgency.

To quote William Faulkner’s oft-cited wisdom: “The past is never dead. It’s not even past.”

See it while you can. It runs only through Sept. 30.

Dar He: The Story of Emmett Till runs at 7:30 p.m. on Wednesday-Saturday and 2 p.m. Sunday through Sept. 30. The play contains adult language and depictions of violence, so audience discretion is advised. For tickets, visit ncstage.org or call 828-239-0263.