Jim Cavener was gracious to write a review for “The 12 Dates of Christmas,” which is now playing at NC Stage until Sunday, December 30th. Cavener was a theatre writer for The Asheville Citizen Times for more than 33 plus years. We are pleased to post the reviews that Jim will be writing for our productions.
The 12 Dates of Christmas review by Jim Cavener
The adventuresome North Carolina Stage Company has again this year given the community two refreshing options to escape from “traditional” holiday fare. Last year it was a dazzling one-woman performance of “The Twelve Dates of Christmas”  and “All is Calm: The Christmas Truce of 1914.” The latter presented the atrocities of war in the words of those who lived it, through the story of the remarkable Christmas Eve truce between British and German troops in northern France. War is not the answer. 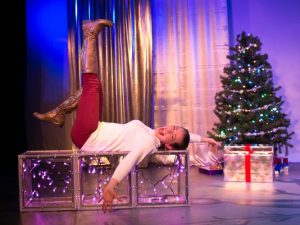 Last year’s seasonal alternatives to “The Nutcracker” and Dickens’ “A Christmas Carol” were opposites in the range of entertainment styles. One was a sober and somber reflection of on-going global conflict, focusing on The Great War of a century ago, and the other a light-and-lively contemporary romp replete with recent feminist issues and current vocabulary and perspectives. This year, while the time-frame of these two offerings is again ranging through decades, both have elements of humor bordering on hilarity.
Playwright Ginna Hoben’s “The Twelve Dates of Christmas” is not just a clever twist on the title of the familiar “Twelve Days….” tune but a fully contemporary and feminist take on dating in urban America in the 21st century. NC Stage Company’s advance materials on the show issue the warning that the show contains “strong language” and, indeed, the F-bomb and other four-letter words do slip into the year-long commentary of a Millennial woman’s pursuit of an appropriate and fulfilling male relationship. It’s a sassy romp, on the surface, but written with considerable insightful depth and performed with great authenticity by quite a capable actor who gives it her all.
NC Stage Co. has a memorable reputation for one-person presentations of high-caliber and great audience reward, going back to and ranging from Susan Claassen’s  “A Conversation With Edith Head” to Willie Repoley’s awesome take on the ancient Greek’s, “An Iliad.”
The current “Twelve Dates” in its second iteration is a worthy addition to this remarkable heritage. In any one-actor stage presentation there is great risk, since the vehicle rests on only two elements: a well imagined and honed script and a talented actor. No amount of costume changes or set design-dazzle can redeem a poorly written play or a badly directed and acted effort to deliver even a good script.
Most able actor Maria Buchanan delivers. This young woman, familiar to local theater aficionados what with several previous NC Stage and Flat Rock Playhouse appearances, gives us a highly kinetic — almost gymnastic, intense and often hilarious Mary, who views her fiancée kissing another woman on live TV’s coverage of the Macy’s Thanksgiving Day Parade, after his telling Mary he was ill from “eating some bad chicken.”  Bad chicken, indeed.
This shocking and disappointing loss catapults Mary into a year-long romp through date-dom, with a range of wild and wonderful characters from Aunt Kathy to David, Dr. John, Aidan O’Reilly and Dr. Hogan to Waiter Rob, Tiny Tim and Mr. Tim.

Maria Buchanan stars in the one-woman show “The 12 Dates of Christmas” at NC Stage Co. (Photo: Nina Swann.  Photography Courtesy of NC Stage Co.)
Thirteen other voices (all Maria’s!) interact with Mary in this marathon 90-minute (no intermission) narrative: one part soliloquy, one part rant and one part reminiscence of things past. Set design by Julie Ross consists of deft design — and nicely lighted by Alice Trent  — metallic sheen, perhaps satin, drapes and eight, inner-lighted, Plexiglas cubes that serve as foils for the frolicking Mary as she chews the scenery and bounces off the blocks.
The show opens with a sparsely decorated, stubby, fake Douglas fir Christmas tree, which Mary slowly fills out by tossing on an additional bauble for each romantic episode. By show’s end the tree is more richly adorned, as Mary arrives at a finally promising potential relationship.
Props design by Catori Swann probably included this miraculous clock hanging at back, center. For each romantic episode it mysteriously advances one hour and make a full circle by show’s end. Technical director Burt Cook may have a hand in this fun element, and when you figure out how it is accomplished, let me know.
Sound cues are right on as designed by Charlie Flynn-McIver. Deft direction by Callan White is evident throughout.  Buchanan’s performance is tour-de-force.
It’s a Wonderful Life will will be playing at North Carolina Stage Company until December 30th.
Wednesdays – Saturdays at 7:30 and Sunday matinees at 2:00.
Additional Saturday matinees on December 22 & December 29.