Jim Cavener was very gracious to write a review for DAR HE: The Story of Emmett Till, which is now playing at NC Stage until Sunday, September 30th. Cavener was a theatre writer for The Asheville Citizen Times for more than 33 plus years. We are pleased to post the reviews that Jim will be writing for our productions. Below you will find more information about Jim’s career and his promise to you, the readers and patrons.

DAR HE: THE STORY OF EMMETT TILL – North Carolina Stage Company

North Carolina Stage Company has on the boards one of the most intense and captivating shows in it’s 16 year history.  Timely, thought the events it portrays are sixty-some years old, “Dar He: The Story of Emmett Till” surely lies in the tradition of the most venerable of all conflicts in American history.  The Great American Tragedy is the result of the country’s early decision to engage in the then common practice of slavery — over the decades, even centuries, perfecting this immoral, inhumane and unspeakable practice into a fine science. The very thought of people being able to purchase and own other human beings as cattle is unthinkable to most of our populace, though it is still practiced in many parts of the world.

American history has been immensely determined  by this sordid and despicable practice, which permeates every aspect of our social, governmental and political life. The results of this sad element in an otherwise often idealistic society has provided a great deal of fodder for our creative literary and theater/cinema life. “Huckleberry Finn,” “To Kill a Mockingbird,” “The Birth of a Nation,”, “Guess Who’s Coming to Dinner,” “12 Years a Slave” and, arguably the three most seminal and landmark examples of American Musical Theater:  “ShowBoat.” “Porgy and Bess,” and “West Side Story” are all the product of this on-going racism and bigotry. Add to the power of the above artistic expressions, the current NCStage show written and performed by the remarkable actor/playwright Mike Wiley. 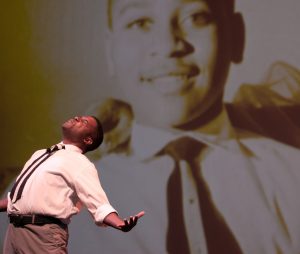 Wiley, a North Carolinian who works from his home in Raleigh, is an exceptional story teller, perhaps an even more skilled and compelling interpreter of his own work. In researching and compiling this grim, sixty-some year-old tale, he reminds us of the continued timeliness of the practice of unchallenged killing of black youth by the predominately white population. Essentially, the tale is accurate history, and when this African-American dynamo takes to the stage, his capacity to interpret some thirty-plus characters from and in the Mississippi Delta in 1955 and following likely transcends his skills as a playwright. One person shows are always a risk, as everything rests on the script and the actor.

In an uncanny demonstration of thespian skills, Wiley uses agile body language and versatile verbal pyrotechnics to create various ages, genders and races, several as noble and worthy personae and some who are evil incarnate.  Wiley uses virtually no theatrical supports beyond his embodiment of the roles he portrays. The stage is bare save for a swivel chair — which, at one point, almost becomes a character in the story — and a small table on which sits an old-fashioned tape recorder. There are scarcely more than a half dozen light and sound cues — though all quite effective. No costume changes, save for the removal of a hat, worn only in the first scene.  The only prop is a large handkerchief or towel, used in so many ways, then dispensed with at the end of the first act.

What helps make the show compelling and rewarding is that the story is real — some of the mostly silver-haired audience recall the actual media obsession of such a shocking story, and the acquittal by an all white and all male jury of the perpetrators of such a heinous crime in the Mississippi Delta. Plus, the stunning and astonishing capacity of Wiley by sheer vocal versatility and bodily physicality to bring to life such a range of characters. This is awesome theater of the first degree. The current epidemic of policy killings of young black men, then the exonerations by judges and juries, even if charged with a crime in the first place, makes an historically painfully artistic statement all the more vivid and relevant.

This 90-minute (one 15 minute intermission) show runs for only eight more performances (through September 30) and opened to an almost full house. And for good reason.  Word will soon be out and tickets will get scarce. No bad seats in the intimate NC Stage house on Stage Lane, downtown, and the single actor is center stage most of the time.  His electrifying and exceptional performance is followed by a brief Q & A session when those who wish to linger for more edification may question the playwright/actor on this riveting product and performance. The unusual title is explained in the context of the script when, during the courtroom trial, a relative of young Till identifies the murderers of the youth.