David Lee Nelson just performed Stages in Charleston, SC and here is what the critics have to say (and much more…): 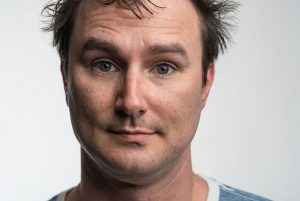 On this episode of Spoleto Backstage, we chat with David Lee Nelson, writer and star of “Stages.”

The antidote to apathy

It’s hard enough to talk about cancer let alone find humor in it. Yet that’s exactly what playwright David Lee Nelson has done with his premiere of Stages. The five act, one-man play is a deep dive into Nelson’s own diagnosis of Stage 4 colon cancer last spring, and if you think that sounds like the most horrifyingly hopeless plot ever, well, you’re wrong…

David Lee Nelson made at least three different trips to the doctor before he realized he might be dying. He had severe pain in his stomach, and no one could figure out why. Then he found out he had stage-four colon cancer. Nelson, still in his 30s, hadn’t imagined he suffered from anything that severe.