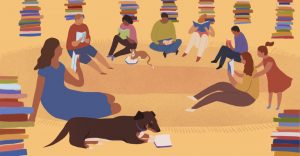 From Anne Hutchinson’s group aboard a Puritan ship bound for Massachusetts in 1634 to the 1996 announcement of Oprah’s Book Club, literary discussions have persisted as a tour-de-force in American culture. It is estimated that there are now more than 5 million book club members in the United States, with most clubs comprising less than 10 members. Here, we explore some key moments in the tradition of American book clubs. 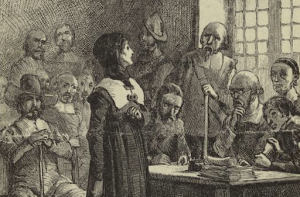 Women have been at the forefront of book clubs since the very beginning. Anne Hutchinson, en route to the Bay Colony in 1634, began a small religious discussion group to expand upon sermons. While she was not the first to organize such an association, she was well known as a critic of Puritan beliefs. The group was eventually shut down by the Colony and Hutchinson was tried and banished to Rhode Island. Female leaders discussing the intricacies of religious authority posed a threat.

The first woman to make a living through writing in the U.S. was the historian Hannah Adams, in the late 1760s. She joined a group to discuss belle lettres, a French term for “beautiful” writing. Belle lettres were at the center of many women’s discussions at the time, offering an aesthetic-focused alternative to traditional fiction, poetry, and prose. Some groups even brought their own writings to share.

Up through the early 1800s, most highly visible and promoted book clubs were overwhelmingly composed of wealthy White women. Educational disparities and the socio-political climate prior to and through the 1800s prevented African-Americans from gathering to discuss literature in the same way as aristocratic Whites at the time.  In the 1820s and 30s, formal groups for African-American readers were popularized, such as the “Society of Young Ladies” in Lynn, Massachusetts. The Society was widely copied throughout the Northeast. It was advertised in places such as Freedom’s Journal, the first African-American owned and operated newspaper in the U.S.

Jane Cunningham Croly, an American journalist and women’s rights advocate, and her colleagues from the New York Press Association were barred entrance to a banquet due to their gender in the year 1896. As a result, she formed a group for women to discuss discrimination, hold lectures and book discussions, and offer scholarships to female colleges. The group was called Sorosis, named after a type of fruit formed from a group of flowers. The organization gained such popularity that some copycat societies survived until 2016 and beyond.

In 1926, a man named Harry Scherman founded the Book-of-the-Month Club, a mail-order service which exists to this day. The popular program attempted to include women’s voices; prolific writer and education activist Dorothy Canfield Fisher was on the first panel of judges who selected noteworthy volumes for the club. The club was also supportive of female authors, propelling the popularity of titles such as Margaret Mitchell’s Gone with the Wind. Despite women’s continued efforts in proliferating book discussion groups, today, if you look up “Who invented book clubs?” Harry Scherman’s name will appear. 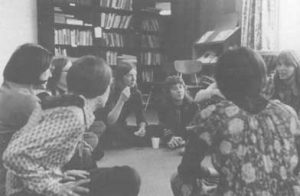 Second-wave feminism in the 1960s and 70s led to the rise of consciousness-raising (CR) groups. These organizations focused on connecting personal experiences to political systems. CR groups are not book clubs, but similarly offer women space to speak their minds and share experiences.

In September 1996, Oprah Winfrey announced her book club, beginning with the title The Deep End of the Ocean by Jacquelyn Mitchard. Controversy stirred in 2006 when her selection of A Million Little Pieces, a memoir by James Frey, was revealed to be manufactured by the author. Her sticker of endorsement still exists on many books today, despite the club’s end in 2010.

Now, book clubs can be synonymous with frivolous amounts of wine and homemade dip, or even a day at the spa. Luxury is a perceived focus of the modern book club, composed of predominantly women. But many clubs report that the longer they spend on discussion of a text (an average of 40 minutes) the happier they are in the club. Intellectual pursuits are still at the forefront – a study by BookBrowse reported that 97% of book club members consider “provoking good conversation” to be the focus in book selection. 73% look for books that challenge and 55% seek books that are controversial.

Following protests in June 2020 after the killing of George Floyd, anti-racist book clubs received overwhelming spikes in membership, many new groups formed, and existing book clubs sought out anti-racist materials. Some see this as a positive shift but many are left questioning whether this trend will motivate true systemic change. While conversations amongst these groups can facilitate an understanding of racial history and White supremacy, social justice advocates are concerned White book club members leave feeling as if they have accomplished something by reading and reflecting without taking the next steps to address biases and engage with anti-racism actions in their own lives and communities.

The coronavirus pandemic of 2020-21 has spurred a resurgence of book clubs. As clubs move to online platforms such as Zoom, members can connect from all over the world. There are even groups forming specifically for this time such as #CoReadingVirus and The Quarantine Book Club. And Asheville’s beloved bookstore, Malaprop’s, has a variety of book clubs meeting virtually that you can join. Whether you’re an avid reader, activist, or someone seeking new connections, there might just be a book club out there for you.

A History of Radical Thinking: How Women Created Book Clubs

The evolution of American book clubs: A timeline

Women’s Groups and the Rise of the Book Club

The Inner Lives of Book Clubs

Can A Book Club Fight Racism?

‘The perfect time to start’: how book clubs are enduring and flourishing during Covid-19