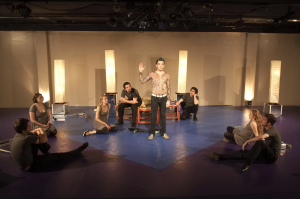 “I Have Questions.” That was the subject line of an email I sent to our union representative at Actors’ Equity Association, the union for professional actors and stage managers in the United States.

As many of you are aware, when NC Stage produces a play, we use a large proportion of union actors. The collective bargaining agreement that we have with Equity stipulates weekly salaries, health and pension payments, travel and accommodation for out of town actors, and work conditions and safety. I wrote this email back in early April in the fog of the first weeks of the shutdown, when the biggest question for us was when could we open up our theatres and have audiences back in.  Most theatres had canceled shows and were in the process of cancelling the rest of our seasons.  There was a lot of hope that we’d be able to pick back up in July. Or August. Surely by September. Somehow.

I wrote that email because in my hope to welcome audiences back in the Fall I had read this lovely play that I thought would be the perfect spiritual antidote to what we all were going through. It hit all the right notes. It was funny, dramatic, clever, had a small cast of four. The set was a little complicated but nothing we hadn’t handled before but other than that, the play seemed perfect. A lovely jewel of a play that asked hard questions, made you think without preaching, and had a satisfying but complicated ending. And then I read the part that gave me pause. The two main characters kiss.

Immediately I thought, “That’s a problem.” And then I thought, “How can I rehearse, let alone perform this play, knowing what we know about this disease?” I was caught off guard at the cascade of implications. How can I produce a play that has more than one or two actors? What about being in the rehearsal space for 3 weeks, 35 hours per week? Tech rehearsals are 10 hours long with actors sharing dressing rooms and chairs 2 to 3 feet apart. Long meetings with designers. Scenes with actors yelling at each other or kissing, or holding and comforting someone. Fight scenes. What about the running crew that presets all the props, some of which are consumable, and runs set changes, electricians that hang and focus the lights, the dressers who do choreographed costume quick changes, the wardrobe crew who does laundry between shows?

I was overwhelmed. I checked in with a colleague and mentioned the kissing scene. His reaction: “Oh my god, you’re right!”

We all began to realize that it wasn’t just audience safety and desire to come back to the theatre we had to worry about.

This realization quickly spread over the industry as Broadway announced  it would remain dark until at least September.  Locally, Flat Rock Playhouse  cancelled its entire 2020 summer and fall season.  The Guthrie Theatre in Minneapolis, one of the largest regional theatres in the country with a $30 million budget, announced it was cutting its budget by 60% and laid off more than 200 people. They will not perform again until, at the earliest, March 2021. Other theatres talked about doing smaller cast shows and spacing out a reduced capacity seating area by literally removing seats. Still other theatres looked to make something immediately available with relevant productions that take place during the pandemic and over Zoom.

While all this was going on, the parade of articles about the current and future state of theatre were published, ranging from why it’s important to produce now more than ever, to the virtues of just stopping for a minute  while a global level catastrophe unfolded.

And finally, the answer to my “I Have Questions” email to the union rep was a definitive, “We don’t know.”

So, we don’t know. Still. None of us. Social distance is anathema to live theatre, to the nature of gathering around each other to tell the stories that make the familiar new, and the new familiar. Until there is an effective treatment or vaccine, none of us knows how to make a safe place for both audience and performer. So, for the moment, we’re not producing.

I have, however, been responsible for one production recently. When my daughter’s senior prom dress arrived, shortly after the lockdowns went into effect, it became clear that there was some literal grief for the loss of normalcy. There was grief for the lives lost, and also grief for all the things a young woman graduating from high school would have taken for granted: graduation, team finals, end of year banquets, senior skip day, prom. I felt helpless in my ability to salve this grief for her. But there was one of these events I might be able to replicate, at least on some scale. Prom. 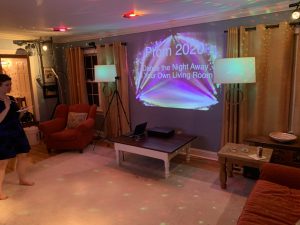 I borrowed lighting and sound equipment from the theatre and set it up in our house.  I got stands for the lights, positioned and focused them, got a mirror ball and pin spot and color gel for the ceiling lights. I even found an app that will synchronize your smart home lights with your Spotify playlist. My wife, Angie, handled the finer touches by ordering our daughter a wrist corsage, creating the refreshment area, securing the willing participation of our 14-year-old son and organizing a Zoom guest list.

This particular inclusion turned out to be key. We invited family members and family friends who have been particularly influential presences in our daughter’s life. You know, the type of friend who your kids call aunt or uncle even though they’re not related. 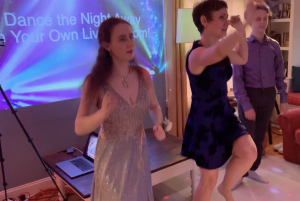 WATCH: Charlie and the family dancing to some Tina Turner

People “arrived” at our home prom at the appointed time dressed in their finery. (My father-in-law, who is a professional musician, even wore his tux). We had people from all over;  South Carolina, New York, Illinois, Eastern and Central North Carolina, and even just a ten minute ride from us. Each of our guests set up a little space in their home and danced with us as our playlist blasted through their computer speakers or headphones. Everyone danced, from the 2-year-old nieces to the 80+ year old grandparents. We got requests for “Baby Shark” from the younger set and “Shout” from the older set. (Hint: everyone moves to that one!) It was amazing to watch everyone have such a blast amid this confusing time. And for a moment, we were able to provide our daughter a sense of connection and hope.

WATCH: The F-Ms dance to Build Me Up Buttercup 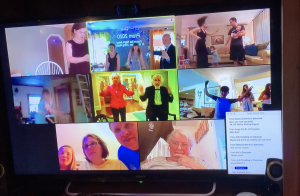 It was way more meaningful than I had anticipated and far more satisfying than I had thought possible. And as I watched this scene unfold I was struck how connected we all felt even though we were separated. Our shared history, like all of our shared history as humans, is resilient but reliant on connection to experience. We could have sent our friends and family a video compilation of me handing my daughter her corsage, or Angie and me acting the fool, or our 14-year-old son coming through with a last dance of the night with his sister. But they all saw it happen in real time. Yes, it was a few seconds delayed and none of us appeared on screen exactly synchronized 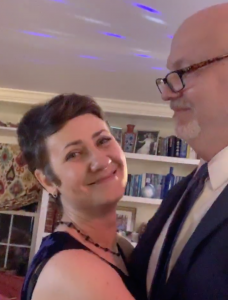 to the music as we heard it, but that didn’t matter. The connection is key. The participation of everyone, performer and audience, is key. And it’s possible. I experienced it. How that translates to scalable endeavors like theatre and how the unions will respond is still up in the air, but there is one thing that is certain. However theatre moves forward it will need to focus on an experience that connects performer and audience in a visceral, if virtual, way.

“There is a hunger to see the human presence acted out. As long as that need remains, people will find a way to do theater.” Zelda Fichandler

WATCH: The party winds down with Goodnight Sweetheart 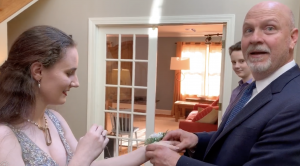 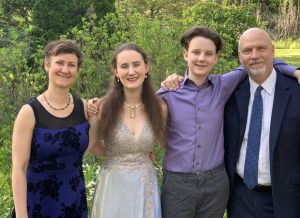