Jim Cavener was very gracious to write a review for FROST/NIXON, which is now playing at NC Stage until Sunday, November 4th. Cavener was a theatre writer for The Asheville Citizen Times for more than 33 plus years. We are pleased to post the reviews that Jim will be writing for our productions. 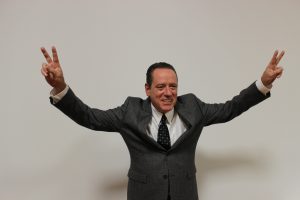 In the spring of 1977, a somewhat controversial British comedian and television show host, and an even more controversial U.S. politician — the first ever to resign the U.S. Presidency — concocted a series of political interviews which attracted the largest TV audience in history (and to date!) for this sort of TV  program. The famed encounters of Richard Milhous Nixon with David Paradine Frost — seen then by nearly 50 million viewers – are  the basis of a riveting theatrical experience on the boards at North Carolina Stage Company on Stage Lane in downtown Asheville.

Americans of-a-certain-age well remember the complicated and complex presidency of the Duke Law School grad who rose through being a California representative in the U,S, House, the U.S. Senate, the Vice-Presidency under President Eisenhower, and as U.S. President, for slightly more than one term. Much of Nixon’s awkward political history was colored by suggested connivance and duplicity, though this often suspect character was able to extract our nation from the prolonged quagmire of Viet Nam, opened up China to the West after decades of isolation, and dealt wisely (most of the time) with the then significant threat of the Soviet Union’s perversions of global Communism.

Finally, though, through the complicity of a cadre of jerks (Halderman, Erlichtman, Kissinger) and his own evasion of truth  in a botched political office break-in at the Democratic National  Committee Headquarters in The Watergate complex on the Potomac in DC, Nixon’s own actions (and avoidance of same) brought down the whole house of cards. In August of 1974 he resigned and flew off to his political home base in California’s Orange County for the last ride in Air Force One. For nearly three years the brooding and self-pitying ex-president hid out in an expansive beach house on the Pacific coast between the town of San Clemente and the San Onofre Nuclear Power Station.

David Frost’s fortunes in U.S. television had become a dicey issue, and Nixon-in-Exile had become a difficult experience for the besmirched president who longed to rehabilitate his image and to become a global Elder Statesman. Nixon had exhausted the U.S. Treasury’s several hundred thousand dollars of resettlement funds allocated to get him out of the White House.  Frost had the chutzpah to raise $600,000 to seduce Nixon (“Checkbook Journalism” — not the most reputable sort) for nearly 30 hours of interviews over a four week period, plus a promise of a hefty percentage of proceeds from hustling four (later five) 90 minute episodes to various outlets in American and European TV broadcasting.

Although Frost had a good record of scoring and taping other world leaders for television diversion, both in London and in New York, he was not known as a heavy-weight interviewer. Expectations were fairly low for any breakthrough revelations from the long-time secretive political operative whose most frequent moniker was “Tricky Dick.”  Frost was expected to lob ‘soft-balls’ and to get evasive responses from the legendarily slimy former world leader, now in exile after having his cover blown. BUT, during this extensive body of discourse, the light-weight Brit comedian/TV-host was somehow able, essentially, to get Nixon to acknowledged that he “…. had let-down the American public, and will have to live with that for the rest of my life.”

That’s the setting of this high-powered drama that had over the past 40 years slipped into the archives of history. Until 2006 when a British film and theater writer named Peter Morgan decided to stage the story in England, starring American actors Frank Langella and Michael Sheen in the title roles as “Frost/Nixon” to raves, awards and commercial success. The show quickly came to New York, then two years later was filmed with the same leads. Even being familiar with the film version, the title might suggest the staged version as a two-man cast. Wrong. The NCStage cast of ten creates a score of roles…. what with various staff assistants, TV technicians and miscellany minor parts.

The on-going miracle of NCStage is once again manifest with their effective usage of limited performing space and of skilled and innovative transcendence of technical liabilities. Production manager Catori Swann and Director Angie Flynn-McIver have channeled the talents of various stage technicians to max-out the potential of this strong story to create an engaging and enlightening evening of historical re-enactment. Julie Ross (Scenery), Erik McDaniel (Lights), Victoria DePew (Costumes), Serena Dotson Smith (Sound and Projections) and Kenneth Horgan (Props) have generated a bravura ensemble of technical theater.

Scenery is limited to two early-generation television cameras at the front corners of the stage, and two sets of multiple monitors along the back sides of the performance area which are fascinating in their ability to show — on screen — exactly what is happening amongst the leads during the interviews. This technical delight is likely the work of Deus Ex Machina Corporation, listed in the program credits as responsible for Technical Direction. The center projections that remind us of our change of locales are effective on the larger screen between the banks of monitors on the sides. Stage Managing by C.M. Garrison and Amelia Driscoll (both members of Actors’ Equity Association) gives a performance free of missed-cues or lost props.

But, what ABOUT the acting in this high-octane excursion?  With four Equity Actors on stage and a director as skilled as Angie Flynn-McIver, the audience is treated to an apparently effortless (not likely) performance of a well-written recreation of an important point in our national history. Michael MacCauley as Nixon and Willie Repoley as Frost are stalwarts of this company and of Flat Rock Playhouse, and each bring high levels of theatrical expertise to the task. Repoley’s sideburns are so ’70s and his shallow entertainer personae is so accurate. MacCauley’s stooped shoulder stance and speech patterns are Nixonesque to the hilt. A critic has to find fault with something and MacCauley’s lack of ski-jump nose and extreme widow’s peak are not quite the extreme I’d like to have seen, but facial surgery is too much to ask, when the essence is already convincingly presented.

The supporting cast has much less to work with, but there are sparks of brilliance coming from Catori Swann and Ben Mackel (also, each Equity members), as well as from John Gripentrop and Scott Keel, who have significant elements in getting across the  intricacies, subtleties  and complexities of the fascinating tale. Marc Cameron, Carin Metzger, Samantha LeBrocq, and Chandler Vance round out an effective cast that adds up to pretty compelling history and theater enchantment.