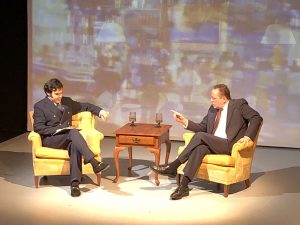 Edwin Arnaudin: Being the Movie Guys, we’re both familiar with Ron Howard’s film adaptation of Frost/Nixon, but neither of us had seen Peter Morgan’s play until opening night at NC Stage Company. Based on this production, what stands out to you most about the work in its original theatrical form?

Bruce Steele: It’s just as gripping, perhaps moreso, onstage as it was as a film. Playwright Peter Morgan, creator of The Crown and screenwriter of The Queen and many other fine movies, has a gift for compressing recent history into taut drama, and the NC Stage Co. production gives it the immediacy and rapid pacing it needs. Were you as enthralled as I was?

Edwin: It sounds like I was, thanks in large part to Michael MacCauley’s portrayal of Richard Nixon. It’s a, well, tricky undertaking and one that could easily fall into caricature, but there’s just enough “classic” Nixon in MacCauley’s balanced yet invigorating interpretation.

Bruce: Asheville audiences have seen MacCauley in roles as diverse as Jeeves the butler, Salieri and Roy Cohn, but I didn’t see anyone onstage in this show except Richard Nixon. In the movie, Frank Langella is technically admirable but never quite shakes his Langella-ness. MacCauley is Nixon from first to last. I especially liked his rambling, passionate, confessional monologue in his late-night telephone call to David Frost. Did you have a favorite moment?

Edwin: That’s a standout scene for sure, but I also enjoyed each little exchange between Nixon and Frost — played with a compelling mix of English swagger and self-doubt by fellow local favorite Willie Repoley — prior to their interview sessions. Nixon expertly uses the first few of them to unnerve his counterpart just before taping begins, though thanks to that bizarre phone chat, Frost at last earns the competitive advantage right when he needs it.

Bruce: Right. The play is a duel between a savvy politician and a street-smart fop, and even if you know how it comes out, it’s still mesmerizing to watch the shifts of advantage. And like any classic duel, each man has his seconds: Nixon has his ex-military chief of staff Jack Brennan (Catori Swann, admirably stalwart), while Frost has a trio: seasoned TV journalist Bob Zelnick (NC Stage newcomer John Gripentrog), U.K. producer John Birt (Ben Mackel) and the play’s narrator, leftist author Jim Reston (Scott Keel). What did you think of this crew?

Edwin: Well, I kept comparing Sam Rockwell’s memorable film version of Reston to Keel’s — and still liked what I saw. The interjected narrations by him and Brennan offer intriguing insights with 20/20 hindsight and it’s fascinating to watch them slide between these direct audience addresses and the past. The dichotomy of Frost’s unified team of researchers and Nixon’s lone ally is also tragically fitting. Do you feel the supporting cast augments or detracts from the two leads?

Bruce: I expected more of a two-man show but was well-pleased it’s an ensemble effort. The supporting players establish the stakes and create memorable characters in their own right. Keel is especially credible as spokesman for the academic counterculture, and Gripentrog reminded me (in a good way) of so many accomplished, high-strung editors I’ve worked with. Carin Metzger, as Frost’s love interest, socialite Caroline Cushing, has a great scene with Repoley on an airplane (invented by Morgan; she and Frost actually met years earlier) and is thereafter given little to do. There’s a lot of balancing necessary to keep this play from tipping one way or another — favoring one side, say, or leaning into the humor — but I thought director Angie Flynn-McIver did a remarkable job.

Edwin: Agreed. It walks that line well and depicts Nixon in a welcome humane light, though my interpretation since seeing Howard’s film in 2008 is that Morgan is pretty firmly on the side of Frost’s camp. The lack of a well-written female presence beyond the in-flight meet-cute is unfortunate but also feels representative of the time and the facts of the story.

Bruce: But the play is hardly restricted by its time frame. Scheduling this production in 2018 is no accident: The parallels to current events are sharply evident, with no need to underline them, here or onstage.

Edwin: Another appealing period aspect for me is Julie Ross’ set design, particularly the walls of television screens on both sides of the stage, featuring live feeds from giant studio cameras (whose lenses are frequently added and removed) just off the slightly elevated stage. I kept wanting to look at the broadcast even with the riveting actual discussion taking place mere feet away. The combination makes for a terrific sensory experience.

Bruce: It does indeed. The set is simple but pure 1970s, and those monitors give you the impression of a historic television moment whether they lure you in or not. Also evoking the decade, and avoiding the temptation to parody, are Victoria Depew’s costumes. I especially liked the important pair of shoes and Nixon’s final “golfing” outfit, but everyone is pleasingly dressed to suit their roles. Overall, I’d say NC Stage Co. is two-for-two on their history plays this fall: First Dar He and now an equally impressive Frost/Nixon. I’m tempted to see it again to take my president-obsessed husband.

Edwin: I missed Dar He — opening night was actually my first time at NC Stage Co. — but am with you on recommending Frost/Nixon and possibly being down for a revisit near the end of its run. I’d be curious to compare the performances, especially MacCauley’s and Repoley’s, at both junctures, though I think both were superb for the first public show. Other than introducing others to the play, are there other aspects you’re most curious to monitor and/or focus your attention?

Bruce: I would bet the stagecraft will just increase in quality night by night — as you say, it’s all superb already, but there were a few minor line stumbles and some apparent technical glitches to be smoothed over. I’ve also been reading up on the actual interviews — which stretched to 29 hours over four weeks — so I’d be curious to look for more of playwright Morgan’s hand in shaping reality into drama. But we should emphasize that viewers don’t need to know anything about Frost or much at all about Nixon to enjoy the play, since it sets up the situation so well on its own. It’s not a long run: You have to see it well before Election Day.

Check out this review on The Asheville Movies website here.

Playwright, actor, director and producer, Jeff Messer has been most recently known as a popular radio talk show host. He has been a part of the WNC theatre scene for over 25 years, and actively works with and supports most of the theatres throughout the region. 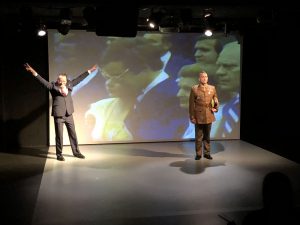 Could you imagine feeling sympathy for Richard Nixon and ultimately finding him to be likable? North Carolina Stage Company poses that question and many more in Peter Morgan’s riveting and entertaining Frost/Nixon. The show runs through Sunday, Nov. 4 — up to this year’s midterm election, which surely isn’t a coincidence.

In the late 1970s, British talk-show host David Frost conducted a series of interviews with Nixon. These took place a couple of years after Nixon’s resignation as president of the U.S. under the scrutiny of the Watergate scandal. Not overtly political, Frost simply wanted the exclusive interview and the potential fame that came with it. Nixon, under the advice of his team, wanted a chance to rehabilitate his image.

The ugliness of pure partisanship rears its head in the form of some of Frost’s team, who simply want to get a confession out of Nixon and essentially convict him in the public eye. They are riled when Frost seems content to get a more humanized version of Nixon on tape, showing a sad, flawed-yet-likable man. They are elated when Frost elicits the famous quote from Nixon: “Well, when the president does it, that means it is not illegal.”

Willie Repoley was born to grow a groovy ’70s head of hair and wears it well as Frost. He also holds the center of the play as a TV personality who is desperate for success. Repoley’s Frost is the beating heart of the show and allows the audience to shake loose some of their more jaded political views as they see Nixon through Frost’s eyes.

As Nixon, veteran actor Michael MacCauley may not look like the former president, but he so flawlessly inhabits the essence of Nixon that you are transfixed by his every word and gesture. The play begins with his resignation speech. As the scene changes, MacCauley rises and exits the stage, and, in silhouette, he so resembles Nixon it caused this reviewer to do a double take. This performance is a crowning achievement for MacCauley.

Director Angie Flynn-McIver sets a brisk pace and trusts her actors and the material to keep the audience on the edge of their seats. She has also assembled a tight ensemble of actors who fill out myriad other roles in the show. Performances from Marc Cameron, Carin Metzger, Samantha LeBrocq, Chandler Vance, Ben Mackel and especially John Gripentrog, Scott Keel and Catroi Swann serve as the glue that holds the lean show together.

It’s emotional to watch Nixon become an eloquent and measured man who ably defends his position in a reasonable way. The notorious president was a flawed person, and he knew it. And, in many ways, he was humbled by it. You can’t help but wonder if future presidents, when faced with scrutiny and the guilt of potential crimes, will be so cool under the glare of that spotlight.

Check out this review on the Mountain Xpress website here.

To reserve your seats online, click here.
Or, give call our box office Monday through Friday 12PM-5PM at 828-239-0263
To check out our latest review of FROST/NIXON, click here.