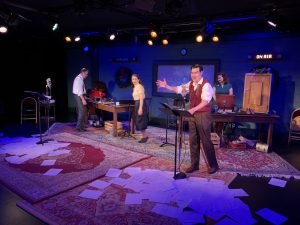 Bruce: Live From WVL Radio Theatre: It’s A Wonderful Life has landed at North Carolina Stage Co. for three weeks this year, an early Christmas present to Asheville theater audiences, since in recent years the annual show has typically had just one Asheville performance by its original producers, Immediate Theatre Project. But NC Stage Co. wisely secured the show’s writer and original star, Willie Repoley, to play the lead for this run, and it still seems as fresh and fun as when I first saw the ITP version some years ago. Since this was your first visit to WVL, I’m curious whether you felt the same.

Edwin: It’s definitely a charming show that I could easily see revisiting on an annual basis (or thereabouts). The story of four WVL studio employees in a small town in 1947 stepping up to play every part in the tale of George Bailey when a snowstorm prevents the regular cast from appearing seems like a treat for the actors as well. The range of vocal dexterity and ingenuity with sound effects demanded by the broadcast’s script, plus the wrinkle of the fictional performers’ own complex lives keeps everyone loose and limber, resulting in a grand night for all.

Bruce: That it is and, as you say, well worth revisiting — not unlike the movie, which is on a biennial rotation at my house. But do you think viewers need to be intimately familiar with the film to make the play work?

Edwin: I think prior experience with the story and characters helps, and that Repoley & Co. are intentionally playing off the content’s canon status. The mental comparisons between film and radio stage show are half the fun of this production, but the cast brings the material so vividly to life that either those with a basic familiarity or none at all should easily find themselves drawn in. I guess my question is: Are there many theatergoers who’ve yet to cross paths with the citizens of Bedford Falls to some extent?

Bruce: It’s doubtful, but I agree with you that even those with sketchy knowledge of the 1946 Jimmy Stewart classic will be drawn in without a hitch. The actors really do bring their many characters vividly to life, especially Repoley, playing George (as well as George’s brother Harry, Mr. Martini and others). When he tells off Mr. Potter, for instance, it’s a real heartfelt tirade, and I got choked up. And while the cast evokes the movie’s performers, they don’t just mimic them. They make Bedford Falls their own. Did you have a favorite resident?

Edwin: You mean other than the newborn babies, who consistently cracked me up with their “wanh-wanh”s — especially when performed by supporting-turned-multifaceted actor H. Christopher Mays (Michael MacCauley), followed by a “that’s the best I can do” shrug?

Bruce: I did enjoy your helpless chuckles at every appearance of MacCauley’s “little ones.” But who else stood out for you?

To read the rest of this review, check it out here!