We wanted to take you on a quick backstage tour so you could see how we set the stage for a production.

Before a single drawing is made, every member of the production team reads the script and makes important creative design choices.  Ultimately, the designers will have to make their vision work with constraints like time, space, and money.  There are several important members of the production team that contribute to the design and build of the set and show.  The set for this show was designed by Dennis Maulden.  The set designer is responsible for designing a set that fits the script and fits the stage.  As many of you know, the stage here has a unique shape and dimensions.

The props designer, Jessica Tandy Kammerud, is responsible for finding all of the furniture and set dressing for the stage.  She will pair her vision with the director’s vision and she also must collaborate with costume designer, George Martinat.  All of the pieces have to work together.  For instance, if Bernard (Flynn-McIver) is dressed in a fancy suit, he can’t be carrying tattered worn luggage.  Important decisions are made by the director to determine some of these character traits so that the design team has parameters that will help support the playwright’s intentions.  All of these adjustments are overseen by Technical Director, Catori Swann.  Swann also designs the lighting to accent the mood and movement on stage.

First, everything is loaded into the theatre. 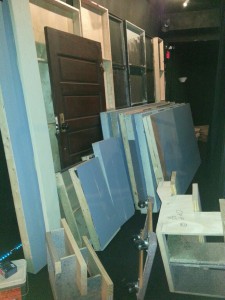 Catori, with the help of a team of volunteers will put down the flooring on the stage and then start building these set pieces that were assembled in the shop onto the stage.  These materials are delivered into the theatre, but while we wait for the set to be assembled, the lobby is filled with furniture and other props. 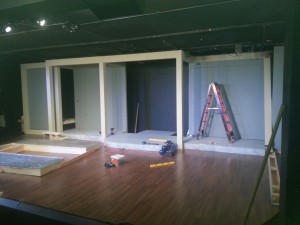 Now the team has the flooring down and they can start framing the set.  Our team makes it look easy, but there are  a few quick trips to the hardware store to make quick fixes as we make sure the set will work perfectly on the stage and that everyone in the audience has a great view. 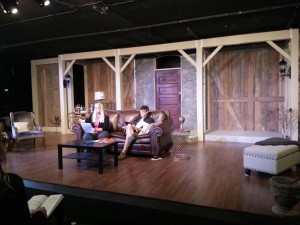 The set is almost finished.  It is ready for the actors.  In this picture, Scott Treadway (playing Robert) listens while Neela Munõz (director) gives notes to the actors about a recent scene run through.  Later tonight, after rehearsal wraps up, the production team will get back to work.  Scenic Painter, Julie Ross, still has to make some finishing touches and Catori Swann will oversee any changes that need to be made.  All of these decisions require a lot of communication between the actors, director, set designers, and technical director.  Stage Manager, Connie Silver, makes sure that everyone is in the loop and that everything is running smoothly.  If something isn’t working during a scene or a loose screw causes a backstage injury, it is up to the stage manager to communicate that with all of the members of the team.

Come and see the finished product during the run of Don’t Dress for Dinner.  See you at the theatre soon!