The 1961 Freedom Rides were a series of coordinated, non-violent protests of segregation on public transportation by interracial groups of civil rights acitivists. The movement followed sit-ins against segregated lunch counters conducted by students and youth throughout the South, and boycotts of retail establishments that maintained segregated facilities.  The Congress of Racial Equality (CORE) sponsored most of the Freedom Rides and some were also organized by the Student Nonviolent Coordinating Committee (SNCC). 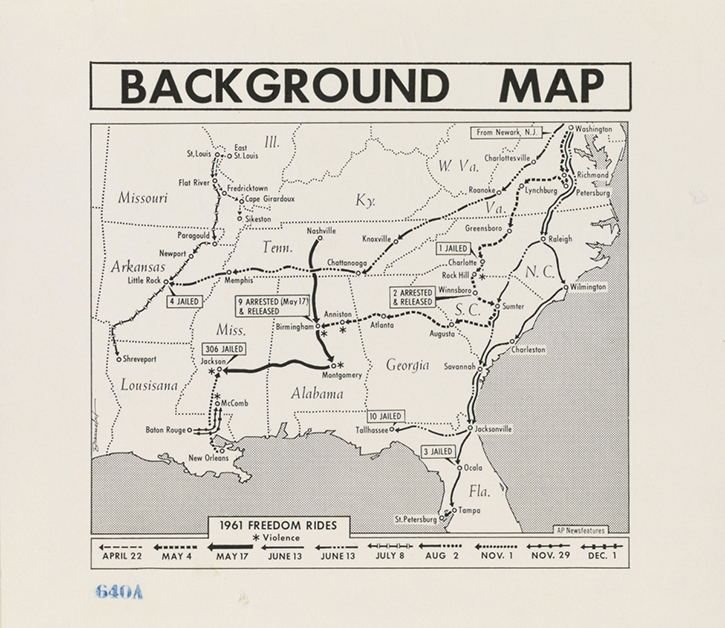 The Freedom Ride strategy was intended to provoke a confrontation between U.S. Supreme Court opinion and state laws. The court had issued a series of rulings outlawing racial discrimination: the most recent, Boynton v. Virginia, had struck down discriminatory treatment in bus stations, restaurants, and waiting rooms.

At the same time, “breach of peace” laws in Southern states made the intentional disruption of public peace or safety a criminal offense. In the eyes of Southern segregationists, attempts to exercise civil rights as upheld by the Supreme Court were considered breaches of the peace and therefore subject to arrest and incarceration. 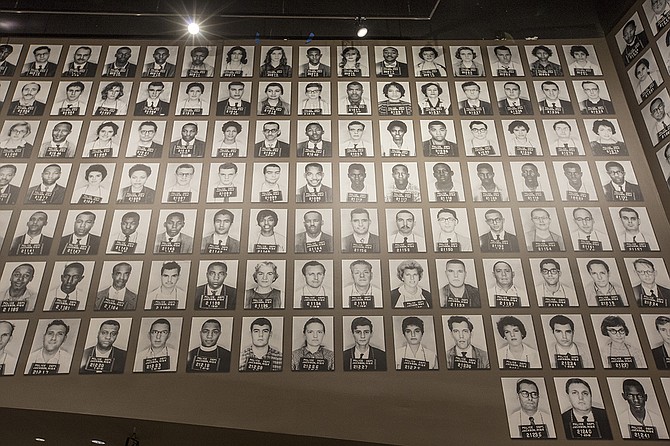 By federal law, the Interstate Commerce Commission (ICC) rather than the Department of Justice had the power to enforce desegregation of interstate transportation.  Following the national attention on the Freedom Rides, Attorney General Robert F. Kennedy pushed for action and the ICC issued the order that officially ended discrimination in interstate commerce on September 22, 1961.

Mike Wiley on the play, Breach of Peace

excerpts from an interview with Shannon Heupel, Montgomery Advertiser, 2019 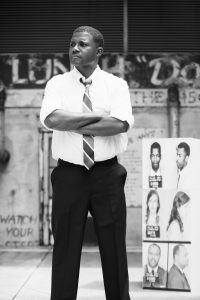 Breach of Peace is an adaptation of a larger production Wiley wrote several years ago. He performs 15 to 20 different characters in his one-man play, all people associated with the Freedom Rides. “Eight major characters, and there are minor characters along the journey,” he said.

“Through characterization and storytelling, I recount the journey of the Freedom Riders from D.C. until their first arrests in Jackson, Mississippi,” said playwright and actor Mike Wiley.

Though the characters are from 1961, this story isn’t dated. The history of this play gets tied into modern civil rights activities through multimedia. “Moments from those Freedom Rides interact with what is happening in America today,” Wiley said. “For instance, pairing photographs from the Black Lives Matter movement with the Freedom Rides.”

It’s a performance the audience gets involved with as well. “An audience, much like a Freedom Rider, can’t sit by idly and wait for events, history and freedom to transpire,” Wiley said. “We must be involved in it.”

That’s especially important for new generations, who may feel separated from these events of history, including youth. “Without this young generation, we will be lost,” Wiley said. “Bringing them along on the journey is one of the most important aspects of the production.”

Sometimes it involves the audience singing along. Sometimes, someone joins Wiley on stage. “I’ve done it with all of my performances to date,” he said. “I really feel like an audience should feel every bit a part of a performance, as close to it as I do,” Wiley said. “And that they should feel they have a stake in the outcome.”

“Through facing this history, we can really have conversations about where we are as a nation right now,” Wiley said.