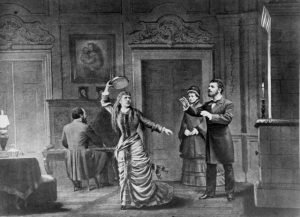 The groundbreaking production by Henrik Ibsen explores the dynamic of a traditional family comprised of a bank lawyer named Torvald Helmer, his wife Nora, and their three little children. Torvald acts as the patriarch while Nora assumes her wifely duties. All appears well until it is revealed by Krogstad, a disgruntled former employee of Torvald, that Nora has incurred an unlawful debt in an attempt to care for her husband in a time of illness. Despite her intentions, Torvald reacts with outrage when the truth is revealed, fearing for his reputation. Fed up with her treatment as a helpless “doll” under her husband’s care, Nora declares her independence and leaves Torvald and her children, slamming the door behind her. Despite the emerging feminist movement, this shocked Ibsen’s 19th century audiences and the act became known as “the door slam heard around the world.”

In 2017, American playwright and New Dramatists resident Lucas Hnath wrote A Doll’s House, Part 2. This TONY-nominated production picks up 15 years after Nora’s departure. Hnath expands upon the relationship between Nora, Torvold, their family,  and the nurse who raised the children in Nora’s absence. Nora, now a successful feminist writer, finds her fate in Torvold’s hands. After all this time, is Nora prepared to face what she left behind?

More about A Doll’s House:

The play was originally published in Norwegian under the title “Et dukkehjem.” At the time of Ibsen’s death, A Doll’s House was available in ten languages. Today, it is published in 78.

Contrary to popular belief, word spread reasonably slowly about the play. It was two years before the play was performed outside Scandinavia and Germany, and ten years before a recognizably faithful version was seen in England or America. France did not see the play until 1894. By the time it took its place in the European theatre annals, Ibsen was over sixty. Source

Ibsen borrowed the broad outlines of the story for A Doll’s House from a woman he knew, Laura Kieler. In 1876, Kieler forged her husband’s signature to borrow money; her husband ultimately committed her to a sanitarium for a time. Kieler also wrote a novel that was a sequel to Ibsen’s play Brand, and she asked him for an endorsement to help get it published; he refused. Source