While the actors are in the rehearsal studio, costume designer Victoria Depew, set designer Julie K. Ross and props designer Ken Horgan are bringing the 1920s Vanderley yacht to the theatre.

The set design by Julie Ross brings the aft deck to dock at NC Stage.  What’s “aft” you say? Aft refers to the rear end of a ship. Julie gave the cast and crew a quick primer on ship directions in the first rehearsal:  Bow is front, aft is rear, port is left, and starboard is right. And she should know! She began designing JEEVES while sailing a boat from Ft. Lauderdale, FL to Dry Tortugas in December. 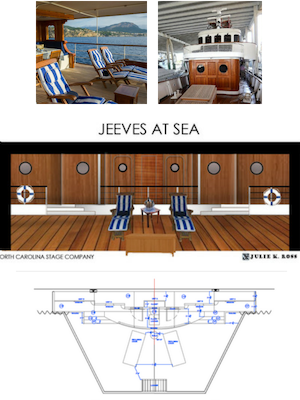 “It was no Monte Carlo, but Ft. Lauderdale has its own sampling of mega yachts and glam.  Plus, it was fun to step aboard an adventure with Bertie, Crumpet and Jeeves,” says Julie.

Research leads to sketches, renderings and a series of drafting that the shop uses to build the scenery and the director uses to stage the performance.

“The set itself came to me pretty rapidly because I had so many references to pull from,” says set designer Julie Ross. “I wanted to pull forth all the levels and curves that are prominent on all boats. I am excited about showcasing all the hidden storage and lockers that one always find aboard a boat.

With Julie focused on the boat, props designer Ken Horgan goes to work on the details. 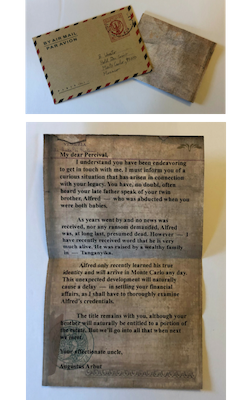 “When designing props for plays such as the JEEVES series and IT’S A WONDERFUL LIFE, I try to design with an attention to detail and with as much realism as possible. There is a certain subtlety one can achieve in realism that can transport an audience,” says Ken Horgan.  “These same nuances can also help the performers and gives them a sense of realism in their role.”

It’s not just what the actors are holding, it is how the set is decorated.  While every item on stage has been meticulously crafted and chosen to bring the time and location to life, Ken adds a little something special to every show he designs.

“I am also particularly fond of “Easter eggs“ in my prop design. I like to leave homages to previous shows, little jokes for the performers and science fiction references. I have fun when I design. It allows me to be creative with everyday items. So keep an eye out at our next show: you never know what you might find on the set!” 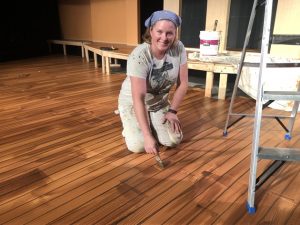 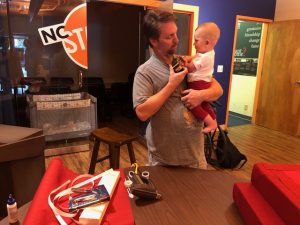 Ken Horgan with his #1 helper.

Jeeves At Sea will open Wednesday, January 23rd and run until Sunday, February 17th. Wednesdays through Saturdays at 7:30pm and Sundays at 2:00pm. Additional Saturday matinees on February 9th and 16th at 2:00pm.