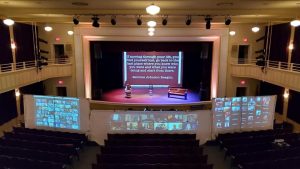 A message from our Artistic Director:

Many thanks to all of you who attended our Zoom presentation of Blood Done Sign My Name. It was great to see so many of you after so long.

Even though it’s not what any of us truly want, and despite some technical snags still to work through, I was very pleased with the way the performances of Blood Done Sign My Name turned out. It took a while for all of us to get used to it, but by the time we closed it felt like we were creating theatre with an audience. Theatre, at its base, is the coming together of performer and audience to share stories, ideas, and compassion. It can’t happen with one or the other not “present” as it were. That’s why we not only developed a way for the performer to see the audience but encouraged everyone in the audience to watch the show with their cameras on. The artists were able to see people laugh, cry, gasp. It affected the performance which in turn impacted the audience. That’s the reciprocal properties of theatre. An endless loop of connection that is not static but constantly evolving. That’s the main reason we think it’s important to have live performers in front of live audiences even though they may not be in person.

What many people may not know about this production was that it was a collaboration between three distinctly different entities. Mike Wiley Productions provided the content of the show, which entailed the writing of the play, rehearsal, contracting Mary D. Williams as the singer and Tracy Francis as the tech director and stage manager, and all the props, sound effects, and projections used in the show.  The Clayton Center provided the stage, theatre and dressing rooms, the lighting, sound, and camera equipment and requisite people to run all that stuff (about eight in all). And NC Stage provided the connection between those two production focused organizations and the audience.  That included everything from coordinating and running the Zoom interface to managing box office and communications to setting up all the equipment for the projection screens so the audience could be a part of the experience.

It should also be noted that each organization was responsible for their own health and safety protocols and adherence.  There was very little contact between the bubbles and any contact included wearing masks, staying apart by at least six feet, and limiting duration.

Now, if NC Stage were to produce its own show we would be responsible for all that; personnel, equipment, rehearsal space, etc., and the health and safety protocols for everyone involved. And in order to hire actors and stage managers in the actors’ union we’d have to adhere to necessary but expensive and extensive safety protocols, some of which simply aren’t achievable in our geographic location. For example, two of the four principles of a safe work environment for the union are the epidemic must be under control (ie: the rate of infection must be below a satisfactory level) and individuals who may be infectious can be readily identified and isolated. Or, in other words, testing. The specific requirements are that each actor and stage manager, and every production personnel they may come in contact with (director, designers, stage crew) must be tested at least three times a week, the test must have a very high sensitivity rate, and results must be returned in no more than 48 hours.

Set aside the fact that access to that number of tests and guaranteeing a 48 hour turn around is currently unavailable locally, this level of testing requires an additional $8,000 to $12,000 of production costs depending on the size of the production.

So we’re working on it. It’s a painstaking process and we appreciate everyone’s patience as we work through this. Keep wearing masks and practicing social distancing. We’ll work on finding testing and cleaning the rehearsal space and theatre but the rate of infection is in all of our hands.