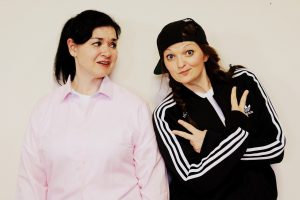 This play has been on a short list for a few years and now seemed like a good time to do it.  I have been attracted to the meta aspect of viewing popular culture and the relationship to fame and the relationship to success.  The play catches the two characters in a contrived moment of brilliance, or miracle, when the script for Good Will Hunting literally lands at their feet.  Matt Damon and Ben Affleck were unheard of at the time and that screenplay seemingly launched their careers.  But of course that’s not actually what happened!  The two had been striving for years.  One of my favorite things to do is see a famous, Oscar winning actor in a movie before they became a household name.  Think Philip Seymour Hoffman in Twister (which, BTW, was his 11th or so film role!).  No one could name him then.  Likewise, with Matt Damon and Ben Affleck, they had eight or so film credits each prior to Good Will Hunting. (They are both listed as “Baseball Fan at Fenway Park” in Field of Dreams!)  And then BAM!  The “overnight success” theme has always been fascinating to me.  People think it’s as if something just dropped in their laps.  And of course that’s what happens in the opening scene of Matt & Ben.  The script for Good Will Hunting just falls from the sky, or ceiling, depending on which character is speaking.  The reality is there has been years of hard work involved in the person’s success and these guys were friends for years.  So there’s that aspect of the play that attracted me.  The relationship of the two as they struggle for success. 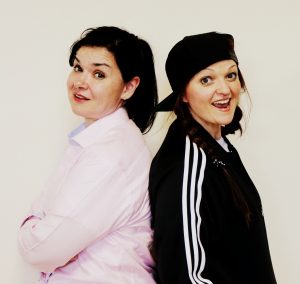 And then there’s the part where the characters are played by two women as it was conceived by the authors, Mindy Kaling and Brenda Withers.  The play was written at a time when there was a tremendous dearth of not just strong roles for women in theatre and film, but little to no talk about it.  The play seems like an empowering way to re-imagine the dynamic duo of Matt and Ben to see what it would be like if they were played by women. The play is written in such a way that the “maleness” of the characters is inherent, the actors don’t have to add stereotypical male behavior.  After a little while you totally buy that these two are Matt and Ben, two college buddies who are living together, each trying to grit their way through the profession of acting.

And the play is just funny.  Sometimes there’s a fear that a play like this is like a Saturday Night Live sketch turned into a movie.  Sometimes it’s brilliant!  But sometimes there’s a one note feel to it that might make a good seven minute sketch but a terrible full length movie.  This play engages on a lot of levels and you start wondering how these characters are going to deal with their moment of choice before stardom becomes theirs.  And you wonder if their friendship will survive, which is immensely fascinating in a play.