NC Stage wants to thank our patrons for their support, love and curiosity! We received a lot of positive feedback and questions regarding our ongoing production of Rapture, Blister, Burn and we are happy to answer the call! We picked our 4 favorite questions and here are the answers from some members of our amazing cast.

How did you get into acting? 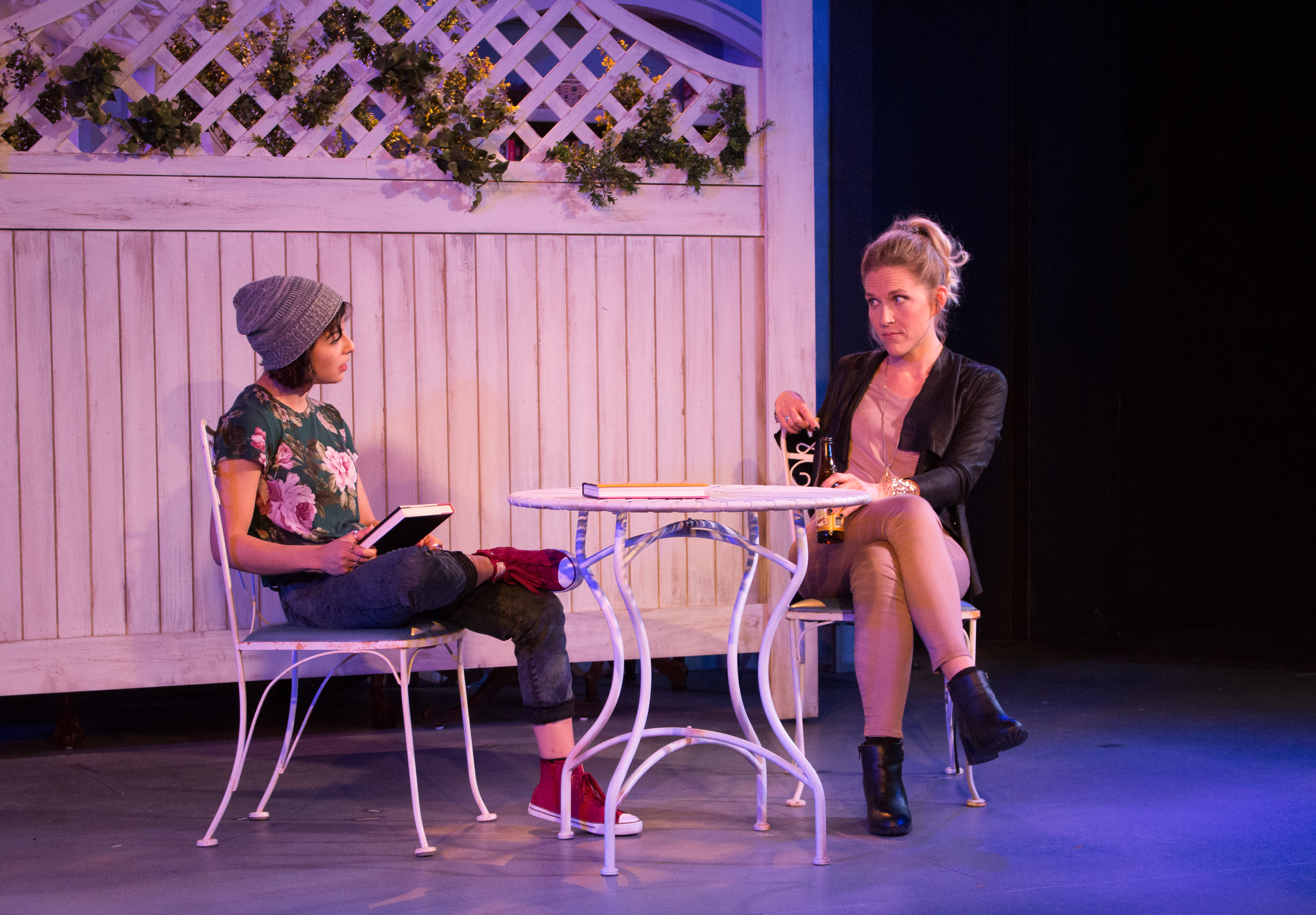 Chloe Babbes (Avery): Both my parents are actors and I grew up around the industry in Los Angeles. Story telling has been a part of my whole life.

Kay Galvin (Alice): It was a childhood dream I did not realize until I moved to Asheville in 1990. I began taking classes with Ralph Redpath at ACT and performed in many productions there and at the smaller theaters around Asheville over that decade. In 2002 I had my first paid job as an actor and in 2003 I made my first appearance with NCSC in their production of “Hamlet” where I portrayed “Gertrude”. The journey as an actor continues. Better late than never!

Kristin Reitter (Gwen): I actually started singing before I started acting. When I was nine years old my mother entered me into a pageant. My older sister, Mitzi, and I were in the bathroom playing with make up when she encouraged me to sing for the talent section of the competition. I sang ‘Somewhere Over The Rainbow’ and won for talent. I was hooked! Once I reached middle school I started performing in the school musicals and plays. I have been performing ever since!

Rebecca Morris (Catherine): My sisters and I had a ‘theatre company’, The Morris Family Theatre, growing up. We performed Sound of Music songs for the French exchange students, created scenes/short plays and forced our younger brother into it. I knew I wanted to be an actor when I was watching my sister Karyn perform in her 7th grade theatre showcase and she nearly choked on a grape. There was something about that frightening realization that anything can happen on stage that really gave me the bug.

What drew you to Rapture, Blister, Burn?

Chloe Babbes (Avery): When the show came to LA my mom went to see it and she loved it! She told me about the character Avery and I’ve been using one of her monologues as an audition piece for the past three years now. It’s been a dream role of mine.

Kay Galvin (Alice): I was drawn to “R,B,B” based upon the subject matter of feminism, and the inter-generational viewpoints surrounding this subject.

Kristin Reitter (Gwen): We moved to Asheville in May of 2015. I was pregnant at the time and thought this would be a great place to raise a child. I had auditioned for NC Stage each season in hopes of performing again. When I saw the breakdown for Gwen in RBB I laughed out loud because I thought, “OMG this is ME!”.

How does your character in the play relate to yourself? 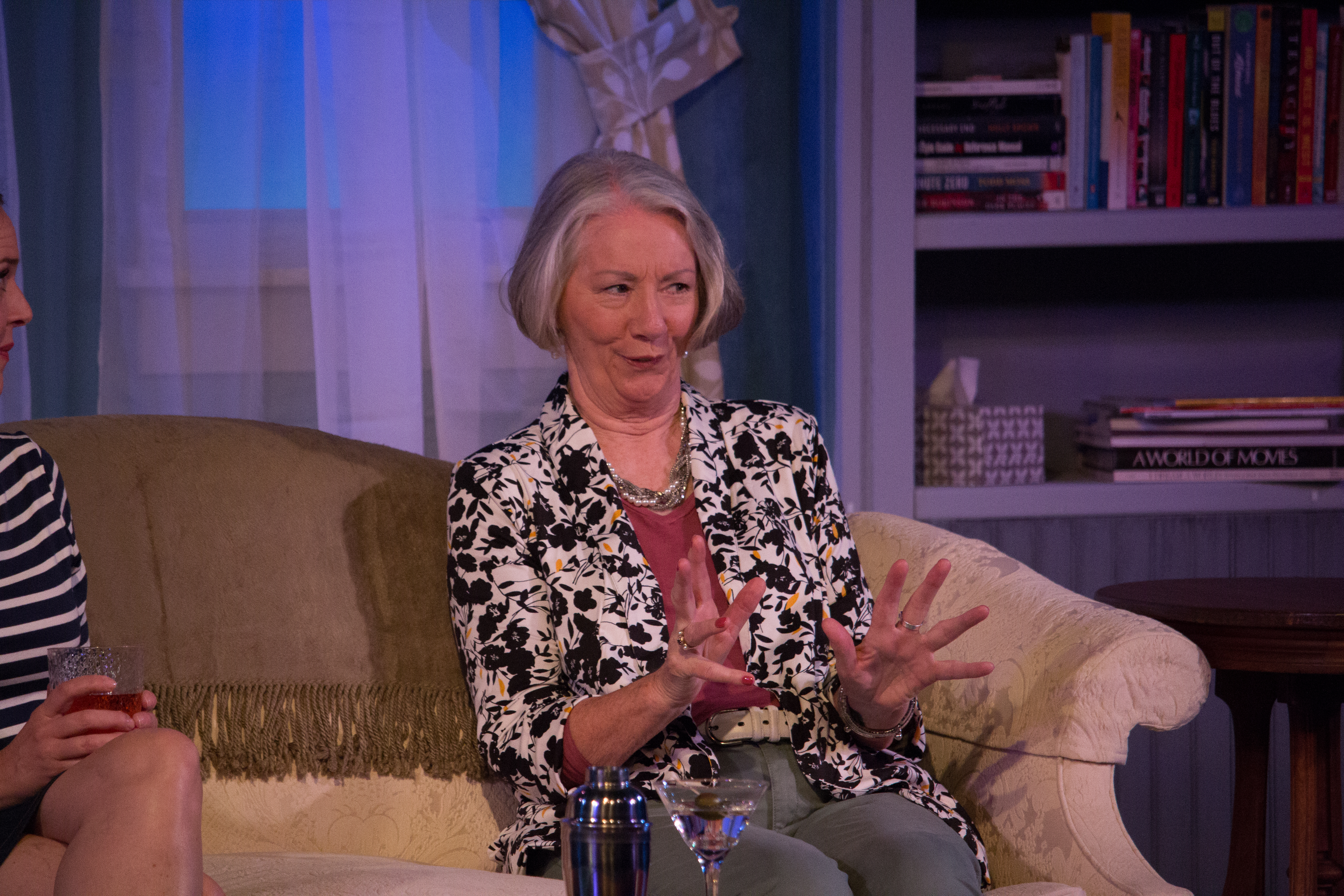 Chloe Babbes (Avery): Avery has a lot of passion and drive. She really goes after what she wants. I’d like to think I’m that way too. Or at least I try to be!

Kay Galvin (Alice): Like Alice I really wasn’t “terribly aware” when the second wave of the feminist movement occurred. I was still living in the UK and although I applauded women burning their bras, I really wasn’t too interested. Like Alice, I consider myself a pragmatist.

Kristin Reitter (Gwen): Just like Gwen, I gave up everything I was doing to be a stay at home wife and mother. I have a beautiful two year old son that is my treasure. However, I am more than a housewife and mother. Gwen quit school and dedicated herself to that very thing. I started later than her but the same questioning has arisen in my 40’s. Is there more? Have I made the right choices? Who am I without my child? Heck, who am I without performing? In today’s world, especially as women, I think it is crucial to give ourselves permission for the “YES, AND” answer. That is a powerful realization I experienced by doing this play.

Rebecca Morris (Catherine): She’s like the Upside Down version of me. While her midlife crisis issues resonate with me, her confidence is something I struggle with to own for myself. This role has really allowed me to challenge my beliefs about who I am and make more room for my own personal bad ass. 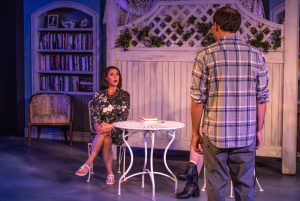 What do you hope the audience will take away from the piece?

Chloe Babbes (Avery): The beauty of the play is the “tri-generational perspective”. I hope that after seeing the play the audience will walk away with a new understanding or different perspective then they came in with. Not that they have a whole new belief system, but that they can have constructive dialogue and respect with those who might see the world a little differently.

Kay Galvin (Alice):I hope the audience finds the play thought provoking. It has been for me.

Kristin Reitter (Gwen): Many of my friends and family that have come to the show want to see it again! There is so much content that effects people on many different levels. Relationships are complex. they are multifaceted and far from black and white. This show shines a huge light on the grey area. Where the light shines we bring our consciousness and awareness. So, I hope this plays offers people an opportunity to laugh, forgive and heal. None of us are perfect, but I believe we are all capable of compassion. Then we can move through life’s tremendous changes with grace and ease. May be a lot to ask for from a play, but there is always hope, yes?

Rebecca Morris (Catherine):I hope the audience will take away the sense that there is no one solution/answer to the questions raised by this script. I hope they’ll talk to each other about how they navigated relationships and what their experience was with the women’s movement etc. I hope this play inspires a lot of people to seek out cross-generational perspectives and to see, that, although this play focuses mainly on women, we all as human beings have to heal these wounds and twisted stories together.