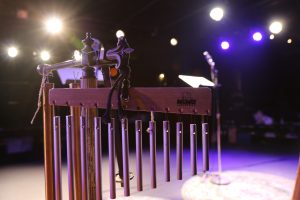 Ever since the producing company of The Word Exchange, Immediate Theatre Project (ITP), moved all their props and costumes from their rehearsal space to the theatre last week, I’ve been eyeing the beautiful sound tables that live upstage. There are bells and chimes, xylophones and phonographs, shoes and gloves, cups and spoons– it’s a plethora of potential noise. I wanted to learn more about using this type of sound effect work in a live show and how the actors incorporate some of the more unusual items into the soundscape, so I sat down virtually with Willie Repoley from ITP to satiate my curiosity about this new production from Immediate Theatre Project.

Maria Buchanan: So Willie, why is live Foley important to the show? Why don’t you just use pre-recorded sound cues like you would in a normal show?

Willie Repoley: In the 1940s, although some sound effects were recorded and played back on a record, most were made live in the studio. Plus, it adds a whole level of fun for the audience to see the sounds being made, especially when something unexpected is used to make a sound.

MB: Ah! So would the radio actors have done the Foley effects in a live broadcast from the 40s?

WR: Probably not. In our WVL Radio world, Lee Wright is the designated Foley artist, but it just so happens that every WVL Radio play takes place on an unusual night. In this case, Lee, Evelyn, Mays, and Kitty have put together this special one-night broadcast to honor WVL’s ailing father-figure, Joe Reed. So they all pitch in to help more than they would on an ordinary night, playing lots of characters each and helping create the live sound effects.

MB: Sounds fun! What are your favorite effects?

WR: I especially enjoyed imagining what people 75 years ago would imagine modern technology to sound like. We imagine they sometimes were surprisingly close, but occasionally they made reasonable but totally inaccurate guesses about technology: what’s an Electrodex? Beats me, but it must have sounded like a very futuristic way to keep track of your contacts to them! Either way, now we know how it sounds.

MB: Ooh! That seems like it could be tricky. What was the hardest effect to develop?

WR: Probably the Nautalis. It’s a new device, not unlike a cell phone but with the added creepiness factor of tapping directly into your brain. So we wanted it to sound futuristic, but also organic. The finished sound effect involves a number of layers, including a Theremin and two large jugs.

MB: Okay, okay. But here’s what we’re all wondering: What’s with the eggplant?!

WR: I can’t tell you, but I promise it’s always a big hit!

Well, there you have it, folks! What’s the eggplant about? You’ll just have to come see for yourself!

Get your tickets right here!
And click here to learn more about Immediate Theatre Project!
—
Maria Buchanan is the Audience Relations Manager for North Carolina Stage Company and lover of theatrical sound in all its forms.